American history is replete with instances of the public pressuring a president to take action on an issue. On far fewer occasions, presidents, through speaking to voters, calling for congressional action, or issuing executive orders, have risked political capital to lead the public to advance on a prominent issue. In the middle of 1862, President Abraham Lincoln convened his Cabinet to discuss taking action on an issue that had been consuming him for weeks but was likely to endanger his bid for reelection in 1864 and was certain to change the direction of the ongoing and increasingly bloody Civil War.

By the summer of 1862, the vitriol had continued to grow between northerners and southerners on and off the battlefield. Many Union soldiers felt it was time to take off the “kids gloves” and “crush this serpent” as anything less had the effect of “guarding rebel property when the owner is in the field fighting us.”[i] A sizable portion of “rebel property” consisted of slaves. In the western theater, General Ulysses S. Grant, pragmatic but not as progressive as he would become after the war, had taken captured slaves or freedmen and put them to work:

“I have no hobby of my own with regard to the Negro, either to effect his freedom or to continue his bondage. . . . I am using them as teamsters, hospital attendants, company cooks and so forth, thus saving soldiers to carry the musket. I don’t know what is to become of these poor people in the end, but it weakens the enemy to take them from them.”[ii]

In the eastern theater, General George McClellan did not share his counterpart’s concerns but instead waded into politics and voiced the Democratic Party’s stance when he instructed President Lincoln that confiscation or freeing of slaves should not be contemplated and that “[a] declaration of radical views, especially upon slavery, will rapidly disintegrate our present armies.”[iii] To McClellan, the war and the institution of slavery must have been kept separate.

Away from the battlefields, in political circles, there were widely varying opinions on the merits of slavery and the place of black people in society. In the abolitionist movement, William Lloyd Garrison and Frederick Douglass expressed their opinions that Lincoln was “prevaricating” and allowing himself to be a “miserable tool of traitors and rebels” by not acting on the issue of slavery.[iv] Where abolitionism most strongly took root, in Massachusetts, the anti-black sentiment was not as strong as those places where slavery was viewed as barbaric but racism persisted, such as the lower Midwest. On the floor of the Senate, Lyman Trumbull, Senator of Illinois, conceded that “there is a very great aversion in the West—I know it to be so in my State—against having free negroes come among us. Our people want nothing to do with the negro.”[v] That sentiment was evident when the War Department brought contrabands into the Midwest to help with the fall harvest in 1862 as it caused panic that blacks were invading the north and taking labor. In Cincinnati, blacks began replacing Irish workers on the docks of the Ohio River causing riots in black neighborhoods throughout the city.[vi] Ultimately, the federal government returned most of the blacks to contraband camps south of the Ohio River to prevent any further unrest.[vii]

By the time that Lincoln read McClellan’s instructions to keep slavery out of the war, he had already determined to draft a document that some would invariably view as radical. That document was the subject of Lincoln’s meeting with his Cabinet on July 21 and July 22, 1862. The Lincoln Cabinet contained a range of personalities and philosophies: Treasury Secretary Salmon P. Chase harbored his own presidential ambitions and had regularly made attempts to be more progressive than the administration; Secretary of State William Seward possessed an unyielding loyalty to Lincoln and his policies; and Secretary of War Edwin Stanton, with his fiery temperament serving as a contrast to Lincoln’s stoicism, had a contentious relationship with Lincoln years before when they were attorneys working on a case in Cincinnati but had come to admire Lincoln as Stanton settled into the administration. The room where they convened had rolled-up battlefield maps surrounding the men, and books lined the walls. Prior to their meeting, few had an inkling of what Lincoln may want to discuss. Then, Lincoln disclosed his plan: to issue a proclamation freeing all slaves in the Confederate states on January 1, 1863.[viii]

Lincoln announced to the Cabinet that he viewed emancipation as “a military necessity, absolutely essential to the preservation of the Union. We must free the slaves or be ourselves subdued. The slaves were undeniably an element of strength to those who had their service, and we must decide whether that element should be with us or against us.”[ix] While some, particularly the rebels, were guaranteed to argue that the proclamation would be unconstitutional, Lincoln argued that the rebels “could not at the same time throw off the Constitution and invoke its aid” after having waged war with all its accompanying “incidents and calamities.”[x] Attorney General Edward Bates, with sons fighting on either side of the war, expressed his support but only if the freed slaves were forced to migrate to Central America or Africa after the war’s end to prevent the “degradation and demoralization to the white race” that he supposed would result from a mixed society.[xi] Chase, already contemplating a presidential run in 1864—and remembering that no president had been re-elected since Andrew Jackson three decades prior—tried to steer Lincoln away from issuing the proclamation as it was consistent with Chase’s own political stance (which was popular with the growing radical Republican movement), and Chase suggested a more moderate position: arm the slaves and allow them to fight in the war.[xii] In the end, each member of the Cabinet save Montgomery Blair supported the issuance of the proclamation, but Seward cautioned to wait “until you can give it to the country supported by military success” because to do otherwise would leave the world to view it “as the last measure of an exhausted government, a cry for help . . . our last shriek, on the retreat.”[xiii]

The next month’s developments further illuminated Lincoln’s posture on the issue of emancipation. In a meeting in Washington, D.C., Lincoln acknowledged the suffering of the black race in America but encouraged their emigration to another place, such as Central America.[xiv] Then, he sent a letter to Horace Greeley in response to Greeley’s editorial, “The Prayer of Twenty Millions,” which was highly critical of the White House’s action, or lack thereof, on the issue of slavery. In Lincoln’s letter, written at a time when he was fully aware that his proclamation would be issued after the next military victory, he stated:

From a legal, political, and tactical standpoint, Lincoln’s crafting of the proclamation was a masterstroke. The Emancipation Proclamation was meant to target the three and a half million slaves in the Confederate states but not the approximately 425,000 slaves in the border states for fear of alienating the border states and pushing them to join the Confederacy.[xvi] Relying solely on his power as commander-in-chief, Lincoln viewed the proclamation as a use of his war powers although it effectively superseded “legislation on slavery and property rights” in the eleven states that were fighting the war of rebellion.[xvii] At a time when the northern states had to maintain focus on fighting the war, Lincoln must have known that the proclamation would not be challenged in court by his detractors and that the proclamation would be a leap forward in the prosecuting the war and achieving reconciliation at the war’s end.

After the State Department had a penman draft the final version of the Emancipation Proclamation on September 22, 1862, Lincoln sat with Seward and prepared to sign. Before signing, he announced:

“I never in my life felt more certain that I was doing right than I do in signing this paper. But I have been receiving calls and shaking hands since 9 o’clock this morning, till my arm is stiff and numb. Now this signature is one that will be closely examined, and if they find my hand trembled they will say, ‘He had some compunctions.’ But anyway it is going to be done.”[xviii]

Then, he affixed his signature using his full name, Abraham Lincoln, rather than his customary A. Lincoln.[xix] With the Union’s repulse of Confederate General Robert E. Lee near the banks of the Antietam Creek in Maryland, therefore stopping a campaign into northern territory, Lincoln had the victory that he needed to issue the Emancipation Proclamation.

Thus, with the proclamation coming into effect on January 1, 1863, over a billion dollars of assets were subtracted from the Confederacy.[xx] More than that, although many slaves in the South would not immediately make their way to the North and although Union troops could not and would not make it a primary objective to liberate the slaves that they encountered during their campaigns, Lincoln’s issuance of the proclamation made the direction of the war clear for all: if the Confederacy did not survive the war and establish independence, the federal government would ensure the complete abolition of slavery. If the war was not about slavery when it began, it was entirely about slavery from the dawn of 1863 to the war’s conclusion. Lincoln would not witness the effect of the proclamation until the end of the war when he visited Richmond: as he walked “with his usual long, careless stride, and looking about with an interested air and taking in everything,” a crowd of black people followed him. They shouted, “Bress de Lord! . . . dere is de great Messiah! . . . Glory, Hallelujah!” Others fell to their knees, causing Lincoln to be overcome with emotion and tell them to stand as they must “kneel to God only, and thank him for the liberty you will hereafter enjoy.”[xxi]

“In view of the vast increase of the forces of the enemy, of the savage and brutal policy he has proclaimed, which leaves us no alternative but success or degradation worse than death, if we would save the honor of our families from pollution [and] our social system from destruction, let every effort be made, every means be employed, to fill and maintain the ranks of our armies, until God in his mercy shall bless us with the establishment of our independence.”[xxii]

Below is a copy of the Emancipation Proclamation: 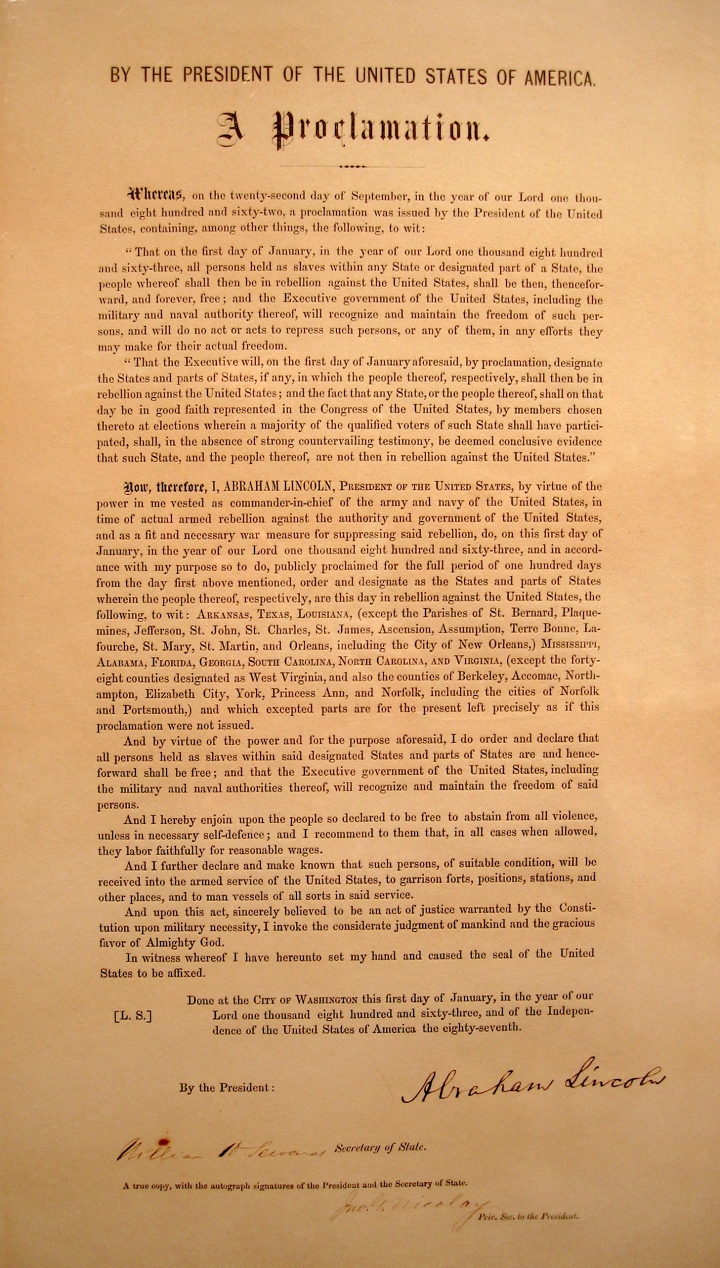